The Psychology of Influence with Kia Davis Kia Davis is an author, blogger, writer, armchair intellectual and idea junkie. Her blog Harmony from Discord dives into mysteries and secrets of critical thinking and metacognition, psychology, human evolution, economics, business, technology, and futurology. With an educational background in psychology and business and a professional background in strategy, financial services, and technology, Kia has worked out several papers on the future of financial services technology (Fintech). Recently Kia published the book ‘Flashpoint 100: Double profit and create lasting business success in 100 days’ for small business owners who want to grow their business rapidly and cost-efficiently.

Joachim is the co-founder & COO of Labiotech.eu, the leading digital media covering the European Biotech industry. It is used by over 15,000 people monthly to keep a watch on the business and innovations of biotechnologies. Join them for free and enjoy reading our stories!

Take a look at his website and feel free to contact him. It will be a pleasure to talk with you about biotechnologies and entrepreneurship!

All About AGI: A Podcast with Peter Voss

Peter Voss is Founder and CEO, Adaptive Artificial Intelligence Inc. He is an entrepreneur with a background in electronics, computer systems, business, and technical software. He is also concerned with the intersection between artificial intelligence software and the human condition as conceived by cognitive science, philosophy, psychology, and ethics. Since the early 1990’s he has been researching and developing artificial general intelligence, founding Adaptive A.I. Inc. in December, 2001 with the goal of developing a commercially viable general-purpose AI engine.

Born in Germany, he moved at age 12 to South Africa. He worked in manufacturing and testing of diesel power generators, and the design and production of large static inverters. He started the company Electronic Designs in 1979 to custom build microprocessor-controlled systems for industrial applications. A year later, he started a computer systems company to provide turnkey solutions to medium sized businesses. After 13 years he took the company public in 1987, employing a staff of 400. He sold the company in 1992, and moved to the United States in 1995.

He believes that integrating insights from the following areas of cognitive science are crucial for rapid progress in Artificial Intelligence:

His other big passion is for exploring what he calls Optimal Living: Maximizing both the quantity & quality of life. He sees personal responsibility and optimizing knowledge acquisition as key. Specific interests include:

These interests logically lead to an interest in Futurism, in technology for improving life — overcoming limits to personal growth & improvement. The transhumanist philosophy of Extropianism best embodies this quest. Specific technologies that seem to hold most promise include AI, Nanotechnology, and various health & longevity approaches mentioned above.

In this episode Gennady Stolyarov II interviews me about some of my guests and current trends in biotechnology. Here I am in the hot seat! We cover gene therapy, nanotechnology, work I have done in nanotech, bioprinting, regenerative medicine, the legal landscape, existential threats posed by biohacking, and the ways in which the DIY revolution is changing biology. Music by Andrew Vavrek of Tryad.

The Economics of the Singularity with C. James Townsend: Mises, Marx, Complexity Theory, Techno-Optimism, and the Way to Abundance

C. James Townsend holds an M.A. in Liberal Arts from California State University Sacramento and a B.A. in Integrated Studies and a minor in physics from the same institution. He is seeking to obtain his Doctorate in Future Studies in the near future. His interests include: physics, Complexity Theory, political and economic philosophy, Marxism, Techno-Optimism, comparative mystical religions-Gnosticism, Taoism, Zen Buddhism and the Russian Cosmists, Transhumanism and Future Studies. His physical interests include Cheng Man Ching style Tai Chi Chuan and Aikido. The Singularity and Socialism is his first published work and he is presently working on a companion book that takes up the ramifications of the coming economic singularity and the financial instruments that will need to be invented in order to stave off the coming inevitable collapse of the welfare-warfare state and burgeoning technological unemployment.

Virtual Reality: A Tour of a Boom Industry with Micah Blumberg and Alexandre Silva

In this podcast Micah Blumberg and Alexandre Calil Sicchieri Silva join me to discuss current VR systems, possible trajectories the technology will take, opportunities for game and film makers, and VR's applications to education, job training, and science.

In this podcast Nicole and I discuss quantum neural networks. Beginning with classical NNs, then moving on to quantum effects in biology, the implications of the afformentioned effect's for neuroscience, information theory, and, finally quantum neural networks. This recording is at once mind-bending and accessible. Nicole is extremely gifted when it comes to presenting difficult ideas.

Memory, Neuroscience, and Society—Lightheartedly: A Discussion with Dr. Mani Saint-Victor

In search of a meaningful path to move beyond traditional drugs and psychiatry, Dr. Mani is a Harvard-trained neuroscientist, author and visionary leader.  He is the author of the upcoming book Break The Cage, MD: The Physician’s Guide to Transcendental Self Medication which helps doctors craft  a lifestyle dominated by their passion instead of by clinical; medicine.  He co-founded- Mindful360 with the goal of applying neuroscience to real world problems and understanding.  Break The Cage, MD  takes that mission further by focusing on Doctors and their desires.

His brain-slapping style of research attracts clients from around the world to actively discover how their minds work and how to think their way to success (without shame). A true polymath, he’s brought much-needed science to the fuzzy world of self-improvement, and he’s equally at ease with everyone from billionaires to Tibetan throat singers.

Graduating from UNC Chapel Hill School of Medicine, followed by an intense Psychiatry residency at University of Miami (the busiest psychiatric trauma center in the United States). Dr. Mani is also passionate about helping fellow physicians understand and benefit from the opportunities of emerging digital trends.

He helps docs get more personal time while earning more money by understanding the fundamentals of creating digital media products.  He helps them to position themselves to benefit from a global market by discovering rich niches based on their expertise and crafting celebrity personal brands to attract affluent-loyal clientele.

The Academy and the Androids: Future Technologies and the Humanities with Peter Moons and Clark Summers 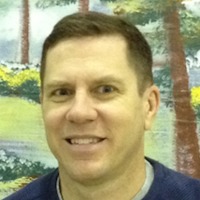 Peter Joseph Moons has a wide academic background and has spent over a dozen years outside the United States. Among his travels, he was in Panama for the tail end of the dictatorship under General Noriega. He also was in Kosovo, Yugoslavia, just after another political strongman, Slobodan Milošević, vacated his military forces from that province. Both of these experiences give him a unique perspective on governmental power.

Peter's current interests include international relations, politics, understanding power and control within dictatorships, complex humanitarian emergencies, conflicts, crisis management, and ethics of technology. His analysis on these topics can be found at www.straterian.com or on Twitter, @Straterian. Peter's academic research papers are available at https://salve.academia.edu/PeterMoons and his complete professional profile is at www.linkedin/in/petermoons.

Younger, Stronger, Smarter: The Future of Gene Therapy with Liz Parrish of BioViva

"Elizabeth Parrish has taken the bull by the horns to spearhead an approach to cure aging using gene therapy that no one has ever had the guts to do before. Her gene therapy approach at BioViva makes all of the previous theoretical iterations of telomerase activation nearly obsolete. It will finally deliver on the promise of my team’s discovery of the hTR and hTERT genes at Geron Corporation and take that promise to the next, powerful and groundbreaking level. THIS is the future of Telomere Biology and therefore human longevity." Elizabeth Parrish is the Director of Outreach at the Complex Biological Systems Alliance (CBSA), Founder at BioTrove Investments, Secretary of the Board at the Regenerative Technology Alliance, and Admin Management at 3 Circles LLC.

Liz is a leading voice of progress, reason, and education for the advancement of biotechnology and serves as a Motivational Speaker for the Life Sciences. She is actively involved in international educational media outreach and works with the International Longevity Alliance (ILA).

The Complex Biological Systems Alliance (CBSA) is an international multidisciplinary team of researchers investigating fundamental questions in biology and medicine. The CBSA is a unique platform for advanced scientific discourse and discovery. The mission of the CBSA is to further scientific understanding of biological complexity and the nature and origins of human disease.

To this end, the CBSA is developing novel mathematical, statistical, and experimental models to uncover fundamental threads of molecular information essential to key cellular functions and biological processes. CBSA members are afforded access to these tools to expedite scientific publication of their research. Moreover, these models provide the means to establish a new paradigm in evolutionary biology.

BioTrove Investments is committed to offering a meaningful way for people to fund research in biotech. This research will help alleviate disease caused by cellular degeneration. New evidence supports the important role of genetics, stem cells, and biotech on health, longevity, and curing of disease. BioTrove Investments wishes to advance research throughout the world to accomplish cures and improve resistance to defects and disease, as well as to achieve physical improvements in the human body. They intend to create a voice for progress, reason, and education for the advancement of biotech.

The Regenerative Technology Alliance (RTA) is a 501(c)(6) nonprofit trade association that brings together individuals, companies, and organizations who work in advancing the emerging field cell & regenerative medicine.

The mission of the RTA is to be a strong and unifying voice in the emerging field of regenerative technologies; to bring together the leaders of this field to develop true global standards for the processing of human tissues & cells used in the field of regenerative medicine; to provide leadership to effectively self-manage & self-police the industry; and to actively engage with regulators & health agencies to develop a third way model for the safe translations of cell therapies from the bench to the bedside.